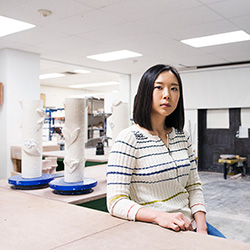 Yoonjee Kwak makes sculptural vessels to represent human beings as iconic symbols from the Korean culture. In Korea, when people talk about someone’s personality, they often use “vessel” as a metaphor of one’s spirit of tolerance. Yoonjee’s interactive conversation with the clay is vital to her process—she slowly builds up clay coils from the bottom, allowing her hand marks to remain on the surface. Through this process of building, memories of patience and time come into her pieces and she is able to create a meaningful record of her practice.

Originally from South Korea, Yoonjee Kwak earned her MFA in ceramics at the School for American Crafts at Rochester Institute of Technology (RIT) in 2014 and her BFA in ceramics and glass at Hong-Ik University in Seoul, South Korea. She was a resident artist and taught ceramics classes at RIT from 2014– 2017. In 2016, she was named an Emerging Artist in Ceramics Monthly magazine and returns to the Bray after being a 2016 Windgate Scholar summer resident. Yoonjee returns as the 2017 Matsutani Fellow.