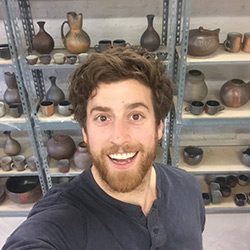 Stuart Gair makes functional vessels intended as much for use as for display. Giving equal weight to considerations of silhouette, curve, weight, balance, volume and proportion, Stuart seeks to produce pieces that command presence in an environment, but which also speak quietly to the viewer. He layers textures and colors using a soda firing process, striving to communicate a sense of quiet and calmness that draws on the hues of natural landscapes. Ultimately, Stuart finds it deeply satisfying to live a life in which there is reciprocal relationship between what he makes and how he observes the world around him.

To view more work by Stuart visit his website at stuartgair.com.