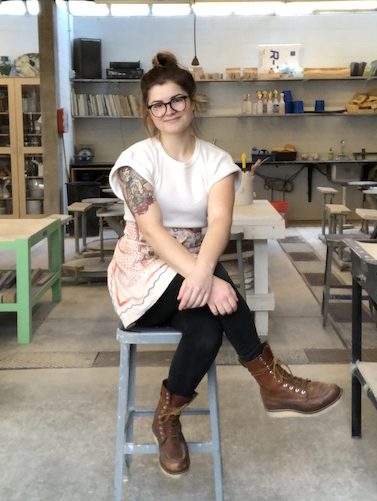 Gabby Gawreluk’s work is simple, yet organized. She creates wheel thrown and slab constructed functional and sculptural ceramics. The pared down shapes in her forms and mellow colors suggest nostalgia and represent a parody of the food items that come from both memory and imagination. Food items are simplified into recognizable shapes and colors until all that remains are cartoon-like forms. The pieces Gabby creates provide a glimpse inside her world—a world that is an accumulation of memories, connections and imagination.

Originally from Minnesota, Gabby Gawreluk received her BFA from University of Wisconsin-Stout. She has completed one year expanding her art practice as a post-baccalaureate student at Montana State University in Bozeman, MT. Her work is featured in both juried and invitational shows in galleries around the nation. Currently she resides in Fort Collins, CO where she is a post-baccalaureate student at Colorado State University.

To view more work by Gabby visit her website at gabbygawreluk.com.