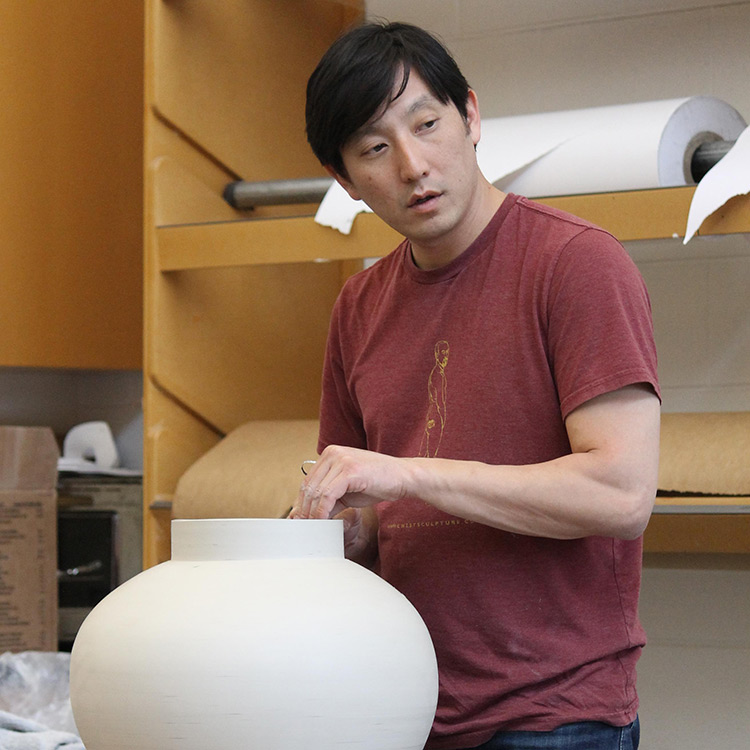 Steven Young Lee has been the resident artist director of the Archie Bray Foundation for the Ceramic Arts in Helena, Montana since 2006. In 2004-05, he lectured and taught at numerous universities throughout China as part of a one-year cultural and educational exchange in Jingdezhen, Shanghai and Beijing. In 2005-6 he was a visiting professor at Emily Carr Institute of Art and Design in Vancouver, B.C.

Steve has lectured extensively in North America and Asia. In March 2013 he participated on a panel, "Americans in the Porcelain City," at the Metropolitan Museum of Art in New York. He was invited to participate in “New Blue and White,” an exhibition at the Museum of Fine Arts in Boston featuring artists working in the blue-and-white tradition. In 2016 hie was one of four artists to participate in the Renwick Invitational at the Smithsonian Museum in Washington, D.C.

He is represented by the Duane Reed Gallery, Ferrin Contemporary and the Archie Bray Foundation. His work has been collected by the Smithsonian Museum, the Daum Museum of Contemporary Art, the Four Seasons Hotel in Seoul, Korea, as well as many private and public collections. He has juried and curated exhibitions throughout the country, and each year since 2007 he has juried the Archie Bray residency program.

Steve received his BFA and MFA in Ceramics from Alfred University. Originally from Chicago, he lives in Helena with his wife, Lisa and their son and daughter Gavin and Florence.

"The objects I create collect elements of form, decoration, color and material from various cultures while questioning failure, expectation and intent. They offer a collision of influences from various origins--Chinese, Korean, French, Dutch, English, Minoan, etc. reflecting my passion for historical ceramics and insights on the past. Ceramic production has long been influenced by an industrial standard of perfection and I commit myself to the integrity and craftsmanship of form and decoration in each piece. Deconstructing and imploding the forms creates a visceral reaction that defies the human desire for perfection and confronts the perception of value. It is in this act that I hope to challenge and redefine what is beautiful.”

To see more work by Steve visit his website at stevenyounglee.com.